Element-X is a resource. It is used in the crafting of some higher level components as well as a requirement for improving passive character attributes. To extract the Element-X, you must build a Harvester over or near enough to the node. Some Element-X nodes are reoccurring in that a node may appear in a similar location to the original, allowing for one (usually upgraded) Harvester to extract multiple nodes as they respawn. The level of the node determines how much can be harvested before depletion and how often the node respawns close to its original spot. Most nodes usually hold 300, 600 or 900 units of Element-X per mining cycle. Nodes that are created in caves are depleted after the first extraction and will only respawn after any player entered the cave again. Higher level nodes on Exo Planets and also in homeworlds can hold large amounts of multiple thousand units of Element-X before final depletion. One node can be mined by multiple harvesters at the same time, prepared that they are owned by the same player. Harvesters will block off a node for other players until the harvester gets removed again by its owner or is destroyed by another player. When a harvertser is destroyed, the contained Element-X will be dropped and can be collected. Element-X is a valuable resource and is often fought over on multiplayer servers. 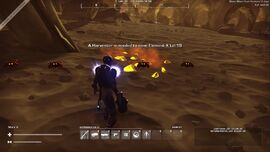